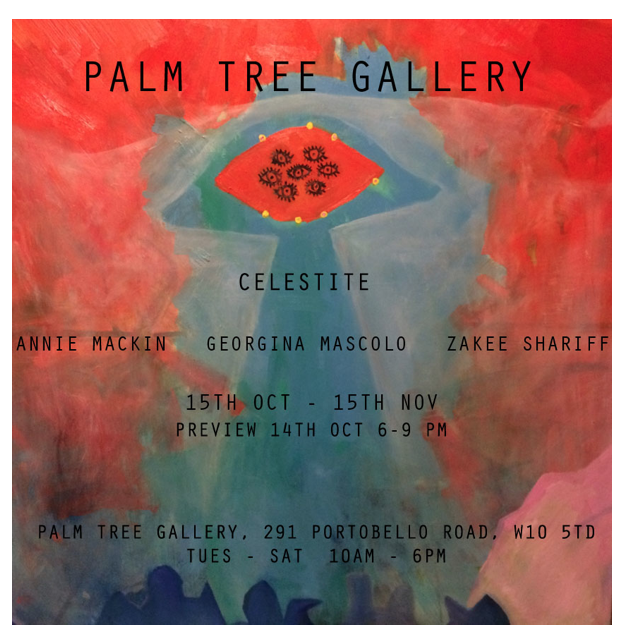 Celestite is the first exhibition to be held in the Palm Tree Gallery, a new space coined as a “canopy of creativity”, where emerging talents in fine art and design will be nurtured and a diverse programme of innovative projects will take place. The gallery’s inaugural exhibition brings together three artists whose mixed media work relates to the mystical and often intangible marvels of our world. There appears to be an awakened awareness in our current society as it shifts its communal consciousness to a more primal understanding of what it is to be human and each of the featured artists expresses this with her own vision.

Georgina Mascolo will be exhibiting an installation made up of her recent series of aura photographs taken using the Aura Cam 600 designed by Guy Coggins in the 1970s. She is one of a handful of people in the UK using this technology, which allows you to see how happy or healthy a person is through the colours of the energy field surrounding their body; their aura. Visitors to the exhibition will have the chance to have their aura photo taken by the artist and purchase their own unique picture.

Mascolo’s images can be used as a reading to know whether and where one is in need of healing whilst Zakee Shariff‘s work for this exhibition mostly revolves around crystals, one of the Earth’s natural restorers. A selection of her bright ink drawings convey the abstract energies created by these precious and potent stones, whilst larger screen prints give an authoritative yet encouraging nod to the powers they can possess. Shariff has trained in and been fascinated by the gift of healing, honouring the personal shadow as well as the light that comes with it and this series pays tribute to that ongoing journey.

Annie Mackin’s oil paintings are abstract visions of reality and fantasy colliding in a spectacular revelation of colours and patterns. They question the notion of the outer being and the self, both the conscious and unconscious properties of our souls. In the painting Naked Eye, Mackin’s base markings are referencing one of the first ever versions of a moon map created by the physicist and philosopher William Gilbert in the 1500s. Viewing the moon with his naked eye, Gilbert believed he could see rivers and marshland and assumed there was life similar to ours surviving there. In modern times we still speculate about life on other faraway planets and the artist captures this essence of distance in time in her surreal paintings. In Mackin’s works on paper we see energetic emotional explosions that can be read as insights to the soul. As Gilbert proclaimed, “The magnetic force is animate, or imitates a soul; in many respects it surpasses the human soul while it is united to an organic body.” As with the properties of the mineral, celestite, the union of the works by these three inquisitive and spiritual women creates a prism of magnetic force that will leave the viewer feeling uplifted, energised, empowered and inspired.

ABOUT THE ARTISTS AND CURATORS

Annie Mackin is a London-based abstract artist working primarily in oil paint. Since graduating from Westminster University in 2009 with a BA Honours in Mixed Media Fine Art. Annie has exhibited in various group shows at Saatchi, Printhouse, Cocknbull and Subway Galleries in London. Most notably, Annie was featured as one of four artists in the Annin arts presents #Mynameis’ project, alongside Turner Prize winner Gillian Wearing. Annie finds inspiration from in between spaces, worlds both seen and unseen. Ambiguously exploring the vast enormity of everything or minute and microscopic nothings, the natural and the supernatural, before life and after death and dreamlike states.

Georgina Mascolo graduated with a First Class BA in Fine Art from Chelsea College of Art in 2009 and works primarily with photography, using its different formats and applications as tools with which to convey more conceptual ideas. She tries to find ways of working that make people question their faith and trust in photographic images and is interested in the idea of the photograph as a document or artefact. Many of Georgina’s ideas centre on themes of mystery and belief. Albert Einstein said, “The most beautiful thing we can experience is the mysterious. It is the source of all true art and science.” It is this meeting of science, art and mystery that is endlessly intriguing to her as an artist.

Zakee Shariff is an artist and designer who lives and works in London. In her work she uses mark-making and colour to replicate an emotional response and translate experience. Be it on a garment, a print or an album cover, her mantra is always present, admirably unrelenting, ever hopeful and alive. Applying it with wit, craft and vision to her self-titled independent womenswear collection from 1997 to 2005 her cult went global and led to further work, often collaborative, across exhibitions and performances, product and publishing. Zakee’s aim is to touch people through her work. Like a beautiful dream, all that’s required to enter Zakee’s world is a willingness to open up, let go and enjoy the ride.

Julius Liu is the director of Palm Tree Gallery. Liu and Sam Palmer  recently co-founded the gallery out of a desire to create an artistic environment that is approachable and comfortable to spend time in. Although the focus will be on fostering the talents of up-and-coming fine artists, they are open to working with all creative disciplines and aim to create a space that feels somewhere between a record shop in 1970s London and the art salons of Paris in the 1920s. Sam’s most recent exhibition, PropARTy, featured 90 emerging artists in a disused mansion in London, giving young artists the chance to exhibit in a lavish environment whilst encouraging the viewer to feel at home rather than in a sterile gallery setting. Since completing his post graduate studies in Business, History of Art and Collecting as part of the IEsA program (Wallace Collection & Warwick University), Sam has worked for Sotheby’s print department and the Fleming Collection. Previous to that he completed his BA in History of Art at Leeds University.

Lauren Jones (co-founder of Alteria Art and Art Barter) is an independent curator and project manager. She works around the globe to bring outsider and emerging talent together with established names across creative disciplines with a focus on contemporary art and music. Recent projects include an Art Barter event in Mexico City; producing and editing The Artists’ Colouring Book of ABC’s with an auction of the original artwork at the Serpentine Gallery in aid of Kids Company charity; curating a weekend of classic film and live music to celebrate Screen on the Green’s 100th birthday; project management on Glasstress: White Light/White Heat and the accompanying catalogue at the 55th Venice Biennale; curating and project managing The Rock & Roll Public Library including a catalogue, limited edition vinyl and live music event at the 56th Venice Biennale.